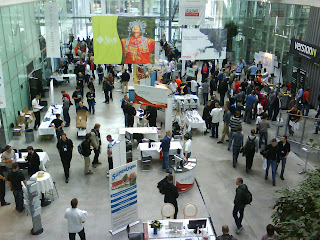 Today was actually a work day for me, as we carried out a major service window. Fortunately, my duties during the service window were limited, so I managed to sneak over and attend a few sessions at Open Source Days while waiting for some SAN and operating system patches to be applied by co-workers.

I attended the last half of Jan Wieck's talk about Slony-I (not "Slony-l", as written in the conference agenda). Slony-I is an asynchronous master-slave replication program for the PostgreSQL database management system. Unfortunately, I don't work much with PostgreSQL in my current job, but if I did, I'd certainly try out Slony-I. It can be useful for scalability (think: read-only database slaves in a CMS cluster) and continuous backup to an offline location. It can also be used when upgrading PostgreSQL, resulting in close to zero down time, because Slony-I can (to a certain degree) replicate between different PostgreSQL versions. Slony-I has some rather impressive replication routing features, so that you have have master->slave->slave->slave.

This talk was an example of why I like participating in conferences with open source focus: Jan was very clear about Slony-I's limitations and weaknesses -- contrary to some corporate guy who might not be lying, but who might be suppressing unfortunate facts. Slony-I has a number of weak points: It's rather complex to install, configure, and manage. And the current version 1 does some dirty tricks with the system schema (will be cleaned up in version 2).

Jan once had a plan for multi-master replication in Slony-I, but that idea has been dropped for now. Fine with me: Although it sounds cool, I would have a hard time trusting such a feature anyway, thinking about the implementation complexity it would entail.

Next, Magnus Hagander spoke about Hidden gems of PostgreSQL. Magnus works at Redpill who provides 24x7 PostgreSQL support (among a number of other services). As far as I know, Redpill has recently opened an office in Denmark -- which means that it's now possible to sign up for local PostgreSQL support in our little pond.

Magnus went through a few selected PostgreSQL features, meaning that he had the time to explain them properly:
After the talks, I went to the SSLUG booth to have a look at the extremely small PC which was on display there. Fascinating stuff. I really like the trend towards down-scaled and cheaper PCs, exemplified also by the EEE (which were everywhere at the conference). At the booth, I had a chat with Phillip S. Bøgh who told me that for a typical desktop PC, 81% of its energy consumption actually happens during production, long before it's sold to the customer. The corollary is that there is value in keeping old hardware alive, instead of buying new equipment whenever some large software company decides to try to force us to buy new products featuring new heights of bloat.
Indsendt af Troels Arvin kl. 19:38