Separation or co-location of database and application

In a classical three-tier architecture (database, application-server, client), a choice will always have to be made: Should the database and the application-server reside on separate servers, or co-located on a shared server?

Often, I see recommendations for separation, with vague claims about performance improvements. But I assert that the main argument for separation is bureaucratic (license-related), and that separation may well hurt performance. Sure, if you separate the application and the database on separate servers, you gain an easy scale-out effect, but you also end up with a less efficient communication path.

If a database and an application is running on the same operating system instance, you may use very efficient communication channels. With DB2, for example, you may use shared-memory based inter-process communication (IPC) when the application and the database are co-located. If they are on separate servers, TCP must be used. TCP is a nice protocol, offering reliable delivery, congestion control, etc, but it also entails several protocol layers, each contributing overhead.

But let's try to quantify the difference, focusing as closely on the query round-trips as possible.

I wrote a little Java program, LatencyTester, which I used to measure differences between a number of database<>application setups. Java was chosen because it's a compiled, statically typed language; that way, the test-program should have as little internal execution overhead as possible. This can be important: I have sometimes written database benchmark programs in Python (which is a much nicer programming experience), but as Python can be rather inefficient, I ended up benchmarking Python, instead of the database.

The program connects to a DB2 database in one of two ways:
After connecting to the database, the program issues 10000 queries which shouldn't result in I/Os, because no data in the database system is referenced. The timer starts after connection setup, just before the first query; it stops immediately after the last query.

VALUES(? + 1)
where ? is a randomly chosen host variable.
If you choose long,  statements like

VALUES('lksjflkvjw...pvoiwepwvk')
will be issued, where lksjflkvjw...pvoiwepwvk is a 2000-character pseudo-randomly composed string.
In other words: The program may run in a mode where very short or very long units are sent back and forth between the application and the database. The short queries are effectively measuring latency, while the long queries may be viewed as measuring throughput.

I used the program to benchmark four different setups:
The results are displayed in the following graph: 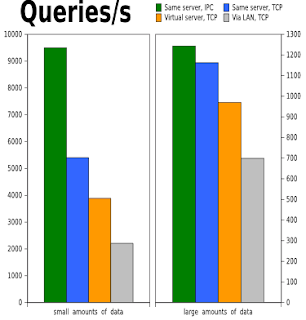 Click on figure to enlarge; opens in new window
Clearly, the the highest number of queries per second is seen when the database and the application are co-located. This is especially true for the short queries: Here, more than four times as many queries may be executed per second when co-locating on the same server, compared to separating over a LAN. When using TCP on the same server, short-query round-trips run at around half the speed.

The results need to be put in perspective, though: While there are clear differences, the absolute numbers may not matter much in the Real World. The average query-time for short local queries were 0.1ms, compared to 0.8ms for short queries over the LAN. Let's assume that we are dealing with a web application where each page-view results in ten short queries. In this case, the round-trip overhead for a location connection is 10x0.1ms=1ms, whereas round-trip overhead for the LAN-connected setup is 10x0.8ms=8ms. Other factors (like query disk-I/O, and browser-to-server roundtrips) will most likely dominate, and the user will hardly notice a difference.

Even though queries over a LAN will normally not be noticeably slower, LANs may sometimes exhibit congestion. And all else being equal, the more servers and the more equipment being involved, the more things can go wrong.

Having established that application/database server-separation will not improve query performance (neither latency, nor throughput), what other factors are involved in the decision between co-location and separation?
Summarized:
Am I overlooking something?
Is the situation markedly different with other DBMSes?
Indsendt af Troels Arvin kl. 02:53 3 comments: