Not all of VLDB2009 was related to cloud storage. Luckily, local and SAN storage is still being explored. Here are some notes from selected presentations.

Mustafa Canim: An Object Placement Advisor for DB2 Using Solid State Storage: What data should be put on disks, and what data on solid state disk storage? Solid state drives (SSDs) shine at random read I/O, but in most situations, there's limited funds, so only part of a database will be eligible for SSD placement. It turns out that if a naïve/simplified strategy like let's place all indexes on SSD is used, only a small overall performance gain is measurable, and it's hardly a justification of the expensive SSD storage. But if placement of database objects (tables/indexes) is based on measurements from a representative workload, then data which is often seeked to can be placed on the SSDs. Canim has created a prototype application which uses DB2 profiling information to give advice on the most optimal use for xGB of SSD storage, and he demonstrated very convincing price/performance gains from his tool. The principle should be easy to apply to other DBMSes.

Devesh Agrawal: Lazy-Adaptive Tree: An Optimized Index Structure for Flash Devices: Since SSDs do not shine at random writes, an SSD-optimized index structure would be highly welcome. The Lazy-Adaptive (LA) Tree index is a (heavily) modified B+ tree which buffers writes in a special way, yielding significant performance improvements. 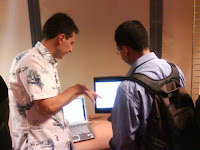 Nedyalko Borisov and Shivnath Babu had a poster and a demonstration about a prototype application they have created: DIADS. DIADS integrates information from DB2 query access plans with knowledge about the storage infrastructure (all the way from files on the disk, through the LVM and SAN layers, to individual disks) to help diagnosing performance bottlenecks. This would certainly be useful for DBAs, and it could probably bridge the worlds of DBAs and storage people. They are considering making it an open source project. By the way: I believe that I've heard Hitachi claim to be selling a tool with a similar objective: Hitachi Tuning Manager.

Finally, a little rule of thumb from Patrick O'Neil's The Star Schema Benchmark and Augmented Fact Table Indexing (part of the TPC Workshop): Throughput of magnetic disks has grown much more than seek latency, so at the moment, 1MB of scanning can justify 1 seek.
Indsendt af Troels Arvin kl. 23:47 No comments: 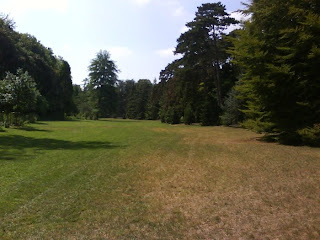 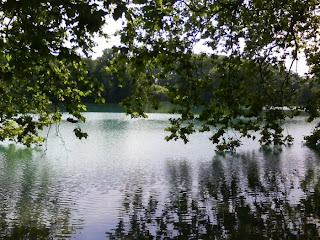 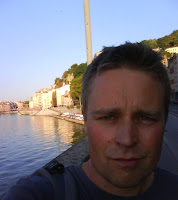 I forgot to take a picture from the workshop, so here's a picture of me being sceptical about traditional DBMS vendors—next to the Saôme river.
Indsendt af Troels Arvin kl. 00:58 No comments: 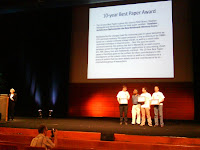 I'm attending the 35th VLDB conference in Lyon: VLDB2009. The conference portrays itself as the premier international forum for database researchers, vendors, practitioners, application developers, and users. Of the 700 people (from 44 countries), I'm one of the few practitioners at the conference; and though there's a risk that the conference will be too research oriented, I've signed up, especially hoping to get the latest updates and thoughts on
During the next couple of days, I'll share my experiences here.

I'm on the road. On the hotel, there's wifi, provided by Orange (France Télécom). The connection has been strange: Most of the time, I couldn't connect to Facebook and MSN Messenger (XMPP/Jabber connections worked fine, though); SSH connections were also unstable. Finally found out that it helped changing my network settings such that the MTU parameter was decreased to 1200.
Indsendt af Troels Arvin kl. 22:05 No comments: